Anwar Gargash : «Turkey seeks to be the standard bearer for Islamists and extremists» 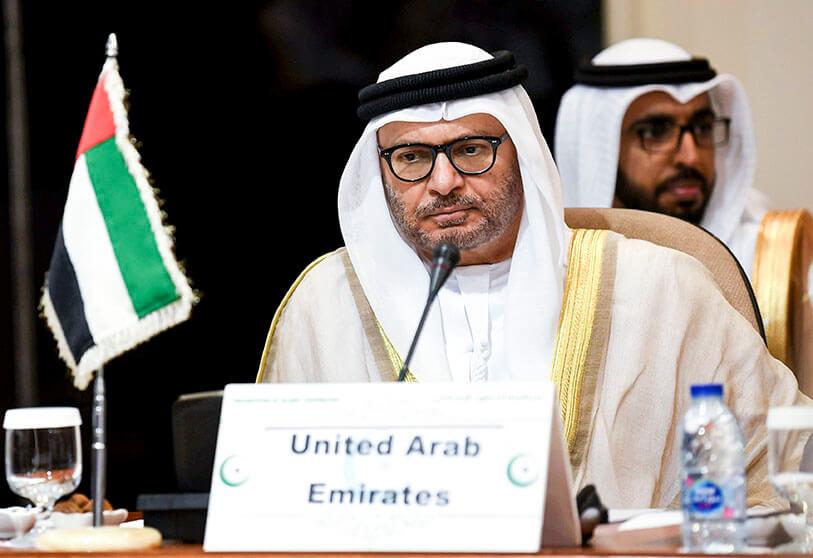 Turkey is today under the influence of the Muslim Brotherhood and it has become an aggressive state which seeks to the a standard bearer of Islamists and extremists in the wider region of Middle East and North Africa say, in his exclusive interview in “To Vima”, Dr. Anwar Gargash. The Minister of State for Foreign Affairs of the United Arab Emirates (UAE), who is widely considered the “architect” of the recently signed peace agreement with Israel (although the mastermind of UAE’s strategy is its leader,Sheikh Mohammed bin Zayed) believes that the politicization of religion constitutes a grave threat. He also clarifies that the prospects for bilateral cooperation with Greece in economy and trade but also in security are huge and they are developing rapidly.

Could you describe to us the steps which led to the historic normalization of ties between the UAE and Israel? Could you highlight to us the key moments?

“The UAE-Israel peace accord didn’t happen overnight, and the dynamics that produced it are not limited to the UAE and Israel.  The region has witnessed tremendous change in the last decades, and there is growing frustration that some of the main impediments to progress, including the Palestinian-Israeli conflict, remain unresolved.  Over recent years, polls on Arab opinion have shown that the Arab people are increasingly in favor of new, pragmatic approaches to the conflict, and to regional development as a whole.  With the recent Israeli push for further annexation of Palestinian land, we saw an opportunity. Last June, our Ambassador in Washington took the unusual step of addressing the Israeli public directly. He spoke to the Israeli people and offered a stark choice:  that of annexation and continued conflict, or normalization of relations with the UAE, and prospects of greater integration and connection to the Arab world. The response from the Israelis was clear – most Israelis value connection with the Arab world more than they value annexation.  The United States was a key and integral party to this accord, as a catalyst and a guarantor of its basic principles. Once that basic understanding was in place, things moved quickly”.

It seems that despite its small size, the UAE has developed a very active foreign policy. What are the main pillars of the UAE’s foreign and security policy? What are its aims?

“The UAE has evolved quickly from a traditional trading community to a modern, dynamic, and progressive state.  We have been able to do this because our leadership have had a long-term vision of the direction it wanted us to go. Our interests are based around commerce, connectivity and innovation, which depend on an environment of tolerance and stability. The accord with Israel is a very good example of both the UAE’s pragmatism and its broader, longer-term strategic vision. Another example is our effort to build scientific knowledge and technological capacity at home, by sending missions to Mars and the moon. We observe today a critical rivalry between moderate and radical players in the Muslim world. What is your view on this? War, economic hardship, rapid social change, dislocation, and the inability to pursue individual and collective aspirations – these conditions create uncertainty and discontent.  In response, the Muslim world has seen a growth in so-called “Islamist” movements, which instrumentalize religion as a political tool. There are many in the region who would like to accrue power and impose backward extremist views by using a false interpretation of Islam as the cloak.

While there are differences between extremist groups in their ideology and tactics, they share many of the basic long-term goals and influence one another. For instance, there are many examples of the Muslim Brotherhood acting as a gateway organization to Al Qaeda. So it’s very difficult to say that there is a clear and permanent distinction between them. Then there are states in the region, like Turkey and Qatar, principally, which provide active support for these groups, and use them to feed their own regional political power ambitions. The UAE’s position is that religion should not be used in politics. Religion has an important role to play in society, and in our system of values, but it should not be the basis of government policy in areas such as energy, security, or healthcare. When religion is employed in support of political objectives or government policies, it can fuel religious radicalism. More importantly, governments need to be tolerant and inclusive of all faiths and provide space for diverse beliefs within their societies. A feature of Islamist political movements is that they are exclusionary and intolerant, often violently”.

Additionally, and more importantly, I would like your opinion on what Turkey is doing both in the Islamic world but also in the East Med, Libya, the Gulf and the Horn of Africa. How dangerous is Turkey for regional stability?

“The current AKP administration illustrates the threats of politicizing religion. In the last 10 years, with the rise of Muslim Brotherhood influence and ideology in Turkey, we have seen the country, under President Erdogan, become an aggressive state that seeks to be the standard bearer for Islamists and extremists across the region, in accordance with a vague imperial notion that President Erdogan refers to as Neo-Ottomanism’. This has motivated Turkey’s intervention in Libya and in the Eastern Mediterranean – Greece, Cyprus, Iraq. Turkey has allegedly sent up to 4,000 Syrian mercenaries to support Azerbaijan in its conflict with Armenia. It threatens the sovereignty through its violations of maritime and air space. Turkey’s influence can be exaggerated, but it is nevertheless a major destabilizing force in the Mediterranean and the broader Middle East. President Erdogan’s extremist vision for the Muslim world- should it succeed in realizing it- could lead to a severe breakdown in tolerance and cooperation between Christians, Muslims, Jews, and other faiths. It would create a more hostile environment in the region and its neighborhoods, with obvious implications and risks”.

Could you highlight to us the recent developments in Libya, the Horn and the Gulf? What is at stake in these regions?

“This question of political Islam is critical to all of the areas you mention – the Islamist agenda is clear and present in all of them. In Libya, Islamists and allied armed militias managed to hijack the Libyan revolution from its popular roots.  This was done on the back of massive support from both Turkey and Qatar. Islamists made major inroads in the 1990s in Sudan, and the Horn of Africa. Twenty years later, the Islamist experiment failed in Sudan, but Turkish and Qatari influence and power remains strong in Somalia and through “Al-Islah” in Yemen. This aggressive expansionism of political Islam, and the spread of distorted interpretations of Islam across Africa and the region, is a major problem, and one that is a drain on our ability to face other challenges, whether they be economic, political, or environmental.  This is one of the biggest foreign policy challenges we face.  And we have to face them collectively”.

Relations between Greece and the UAE are rapidly expanding. What should we expect in the future? Which sectors sound promising for closer economic and security cooperation? Would you also envision the UAE participating in regional fora such the East Med Gas Forum or even in the formation of new ones for example on green energy?

“The UAE and Greece have enjoyed warm diplomatic relations since 1975, a few years after the UAE was founded.  Greece is on the front lines of several of the region’s hot spots, sharing borders as it does with Turkey, and Libya. Greece is an integral part of the Mediterranean economic, security and political ecosystem, while being a member of the EU and NATO. In the last year, the UAE and Greece have significantly expanded our bilateral security cooperation, including through the UAE’s participation in the INIOCHOS joint military exercises. The UAE and Greece have more common interests than ever before, and we are collaborating, as you say, in many other areas, from energy exploration and development, to infrastructure, finance, tourism, food security, and trade. Prime Minister Kyriakos Mitsotakis visited Abu Dhabi in February 2020 for meetings with His Highness Sheikh Mohamed bin Zayed, during which the UAE and Greece announced a common aspiration to have a Comprehensive Strategic Partnership across a range of areas. Several Memorandums of Understanding have been signed since then. We want to significantly boost bilateral trade to reflect the importance of our partnership. From a cultural and scientific perspective, our two countries maintain active research connections, highlighted by this year’s virtual UAE-Greece Strategic Forum in July.  The results of some of these collaborations in agriculture, tech and education will be presented at Dubai Expo2020 (to be held in 2021). The UAE sees the stability and prosperity of the Mediterranean as vital to the health of the Arab World. For this reason, we hope to increase collaboration between the UAE with Greece, and other Mediterranean countries, including now Israel”.

Many analysts are presenting the UAE as a very modern Muslim country. You have invested a lot in modern technologies, nuclear energy etc. What is your master plan?

“The world is facing more change, challenges and threats, and opportunities, than it has in the history of the human race.  This is our collective challenge, regardless of what country we live in.  But we are committed to doing our part – that means focusing on development, education, technological advancement, clean energy, increased connectivity and the alleviation of human suffering. We are a Muslim country, yes, and that is an integral part of our identity, but we have no desire to impose our faith on anyone. We have worked hard to create an environment at home in which all faiths are welcome, and in which one’s faith, whatever it may be, is a source of inspiration and grounding rather than a source of conflict”.